The Bank of England’s Monetary Policy Committee (MPC) has voted to raise its official bank rate to 1% – the highest rate since 2009. It is the fourth consecutive rate hike since December – the fastest increase in borrowing costs in 25 years.

There had been speculation ahead of the meeting that one or two MPC members might opt ​​for a 0.5% raise. But the vote was actually split 6-3 to raise the bank rate by 0.25%, with three dissenters, Catherine Mann, Michael Saunders and Jonathan Haskell, preferring a bigger hike. This represented a change in momentum from the previous meeting, where eight members voted for a 0.25% raise and one opted for no change.

The MPC doubled down on its March narrative, exposing the potential for a sharp slowdown in activity over the coming months and sharply slashing its growth forecast as the negative impacts of the rising cost of living weigh on revenue household real.

A 0.25% increase was widely expected, with markets suggesting a 15% chance of a 0.5% increase. Following the announcement and more pessimistic comments from the MPC, market expectations for the path of the Bank Rate have fallen. Investors now see rates peaking at around 2.5% in the middle of next year, up from 2.6% before the announcement.

Despite the rate hike, the pound fell to its lowest level since June 2020 following the decision and statement, as worries grew around the growth forecast and the perceived risk of indecision within the MPC. The pound fell just under 1.5% against the dollar to under $1.24.

The MPC is clearly struggling to find a balance between runaway inflation and the economy tipping into recession. As a result, we have a divided committee and confused messages. The MPC repeated a form of guidance it issued in March, when it said “modest further monetary policy tightening may be appropriate in the months ahead.” However, at this meeting, the minutes highlight a split among policy makers, with “most” members accepting the directions. The word ‘modest’ has also been changed to ‘to some extent’, which may indicate that at least one member now thinks interest rates still need to rise significantly.

Confusingly, two members of the committee judged that the risks linked to activity and inflation over the political horizon were “more evenly balanced”. Therefore, it seems likely that these two members could vote to keep the bank rate at 1% at the next meeting on June 16.

The Bank has once again revised its inflation forecast upwards and now expects CPI inflation to continue to rise for the rest of the year, to just over 9 % in the second quarter of 2022 and an average of slightly above 10% at its peak in the fourth quarter of 2022. The majority of the other This increase reflects the increase in energy prices for households following the sharp increase in the price cap from Ofgem in April and a further sharp increase expected in October. The expected rise also reflects higher prices for food, basic goods and services.

Again, the Bank has tried to point out that it is unable to contain many of the causes of this high level of input inflation:

The economy has recently been subjected to a succession of very significant shocks. Russia’s invasion of Ukraine is another such shock. In particular, if recent movements prove persistent as central projections assume, very high levels of global energy and tradable goods prices, of which the UK is a net importer, will necessarily weigh more heavily on incomes. of most UK households and on many business profit margins. This is something that monetary policy is unable to prevent.

At the press conference following the decision, Bank Governor Andrew Bailey held a similar narrative to that expressed in his recent speeches. Explaining the rate announcement, he said the Bank was following a very narrow path, citing spending from savings built up during the pandemic and a tight labor market as potential contributors that could allow for second-round inflation. :

Underlying nominal income growth rose more than expected in the February report and is expected to strengthen in the coming months, given the continued tightening of the labor market and upward pressure from rising inflation. price.

Given that the Bank is confident that rate hikes will have limited effects on input inflation, we continue to view the strength of the labor market as the main justification for recent rate hikes, as the Bank seeks to avoid side effects of inflation such as rapid wage growth. However, even this bright light of post-Covid recovery looks threatened, with the Bank predicting (albeit after further short-term reduction) a vs0.1.5% increase in unemployment in three years, which could ease some of the wage pressures that have been building up here.

The risk of stagflation

The Bank stressed that soaring energy and goods prices will have a significant impact on the UK economy:

UK GDP growth is expected to slow sharply in the first half of the forecast horizon. This mainly reflects the significant negative impact of sharp rises in global energy and tradable goods prices on the real incomes of most UK households and on the profit margins of many UK businesses.

Total real household disposable income is expected to fall by 1.75% in 2022, a larger drop than in the February projection. Four-quarter consumption growth is expected to slow significantly in the first half of the forecast period.

So it seems that with inflation projected in the double digits towards the end of the year and growth stagnating, we seem to be approaching a period of stagflation and the future performance of the economy looks increasingly tied to how much household support the Chancellor could inject into the economy.

With the discount rate now at 1%, the MPC has triggered its self-imposed threshold at which it will “consider” active sales of gilts held in its asset purchase facility. Unlike the US Federal Reserve’s decision to start selling its stocks last week, the MPC only asked Bank of England staff to work on a sell strategy. Their work will be presented to the MPC at the August meeting for discussion.

Future development of the discount rate

We maintain our view that the MPC will now pause its rate hike cycle while it assesses the economy’s momentum, especially in light of the bleak economic growth projections. With the MPC’s guidance divided, confidence in our assessment is low, with the Bank itself stressing “there are risks on both sides of this judgement.” Therefore, the chances of a fifth consecutive rate hike in June appear well balanced and another hike cannot be ruled out.

Despite the Bank’s latest economic projections, the trajectory of market-implied interest rates now shows rates rising to 2.37% over the next 12 months from 2% in March, which we continue to view. as too optimistic. 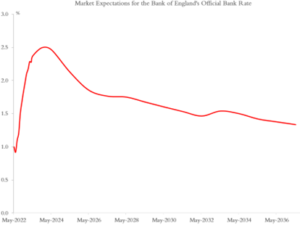 Since the start of the year, we have been positioning investments within our three treasury funds to allow their net returns to react quickly to this new rate environment. Using CCLA’s Public Sector Deposit Fund (PSDF) as an example, within the next seven days, 45% of holdings will have been rolled over at the new higher rates, 54% within one month and 86% within three month. We should therefore see a relatively rapid readjustment of their net yields.

Given the volatility we have seen in recent months at the longer end of the curve, we have been reluctant to extend funds over these periods, protecting market values ​​in the process.

The CBF Deposit Fund Reported Rate will increase on Tuesday May 10 to 0.8%, at the close of business on Friday May 13, we expect the PSDF net yield to be around 0.82%, while the COIF Charities Trust Fund is expected to hover around the 0.72% mark. , and we expect the upward trend in these yields to continue in the weeks and months ahead.

This document is issued for informational purposes only. It does not constitute the provision of financial, investment or other professional advice. Past performance is not a reliable indicator of future results. The value of investments and the income from them can go down as well as up. Investors may not get back the amount originally invested and may lose money. All forward-looking statements are based on CCLA’s current beliefs, expectations and projections. These opinions, expectations or projections may be changed at any time. CCLA assumes no obligation to update or revise them. Actual results could differ materially from those anticipated.

The Bank of England yesterday pursued another interest rate hike – its third in a row. In another blow to households coping with the crisis, Boris Johnson returned from Saudi Arabia empty-handed Britons face rising borrowing costs ( Image: Getty Images) Households are facing rising borrowing costs, just as it emerged that almost eight million […]

The Reserve Bank of India (RBI) on Friday said it intended to keep borrowing costs low for government and businesses by buying more bonds in the market, although it left policy interest rates unchanged and policy direction to heal a fragile economy. a global commodity price spiral. Growth forecasts for FY22 were revised down one […]