After years of prosperity supercharged by increased liquidity in the pandemic era, The Canadian housing market could be in trouble.

What is a real estate crash?

A real estate crash is marked by a sharp drop in house prices.

House prices are largely cyclical, in line with the economy in general, because much of the average person’s wealth is tied to the value of their home. Lower incomes have hurt housing demand due to a lower supply of available buyers.

When a recession hits, house prices begin to fall, hurting homeowner confidence and encouraging them to slow down their spending, which can worsen a further contraction in the economy and house prices.

A real estate crash follows a period of aggressive price increases, defined as a “bubble”, during which activities such as speculative buying or setting low interest rates push prices above their rational market rate. This is different from rapid price increases based on low supply, which is more endemic and requires prolonged government policy to stop.

Rising interest rates can trigger a housing crash by adding additional costs to owning a home. Interest rates set by central banks, such as the Bank of Canada (BoC), filter through to influence mortgage rates set by other banks. Rising rates increase the price of owning and maintaining a home, which could encourage more people to sell their homes while reducing the number of buyers.

Rising interest rates also tend to slow down an economy by discouraging investment and spending, which further hurts income and home buying confidence.

When looking at the history of housing market crashes, analysts typically focus on the 2000s. many buyers, forced to seize homes, proved that the market was irrationally inflated.

A collapse in house prices in Canada could therefore occur due to rising interest rates, which could significantly distort the behavior of buyers and sellers.

Will rising interest rates trigger a crash in the Canadian housing market?

Interest rates in Canada are rising at a rapid pace in an attempt to combat huge levels of inflation caused by the lifting of Covid-induced restrictions and rising energy prices linked to the invasion of Ukraine by Russia. 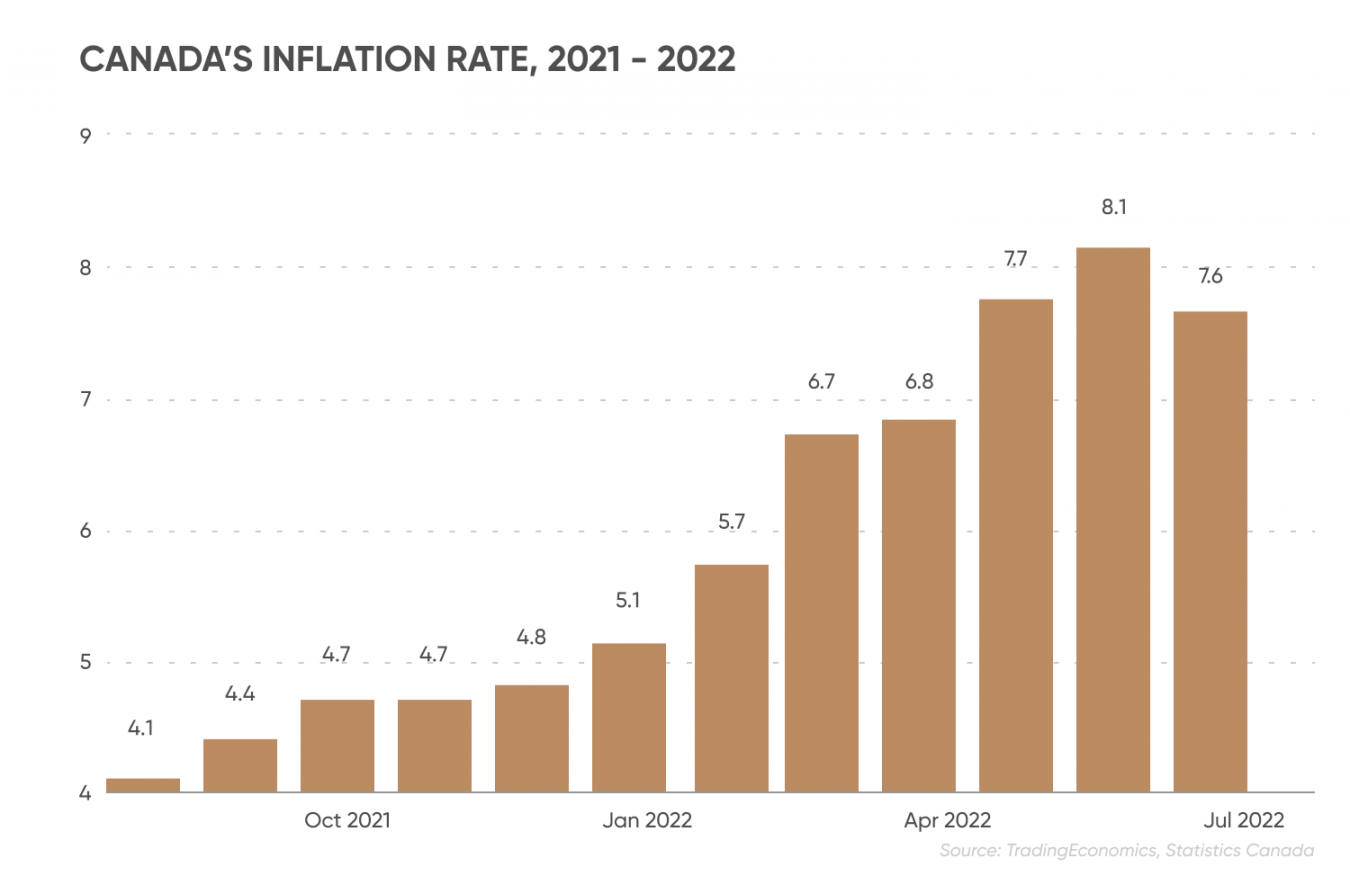 Canada’s central bank has launched a schedule of interest rate hikes aimed at slowing rising prices, pushing the cost of borrowing to a record low near zero in 2020.

On September 7, the BoC prompted an increase of 75 basis points during its last leap, bringing the key rate to 3.25% and its discount rate to 3.5%.

“Given the outlook for inflation, the Board of Governors still believes that the policy interest rate will need to increase further. The quantitative tightening complements the increases in the policy rate,” the bank said in a statement, indicating that the increases rates could continue until prices fall.

The effect of rate hikes on the housing market is beginning to be felt. Could this be the start of a collapse in the Canadian real estate market? 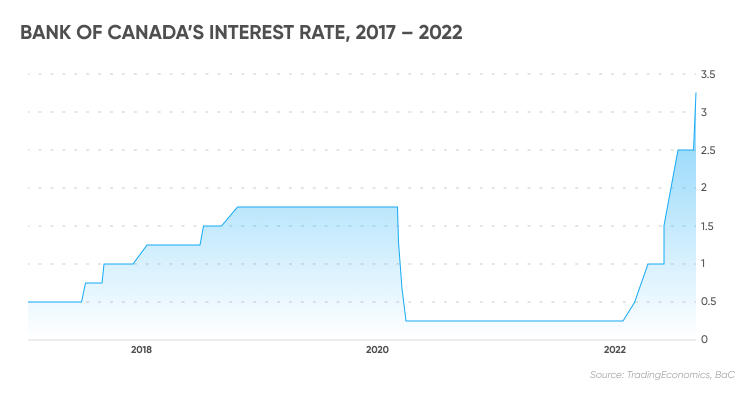 Home prices in Canada have experienced steady growth over the past 12 years. Data compiled by Teranet and the National Bank of Canada showed that prices have steadily increased since 2010, outpacing annual growth by nearly 13% in 2010 and more than 14% in 2017.

After a slight lull at the height of Covid-19 restrictions, real estate prices in Canada have soared, outpacing year-on-year growth by more than 18% in mid-2021 and 2022, as cash from government stimulus measures flooded the market.

However, the last analysis for July 2022, the prices show that prices fell 0.27% during the month, marking the first monthly contraction since September 2019. 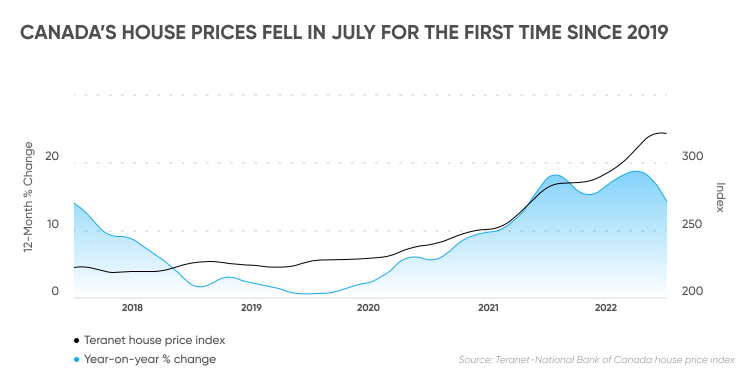 However, the Canadian market, like many others, has been supported by low levels of supply, which tend to fall well below demand thanks to relatively low government investments, migration trends and demographic factors affecting the natural bearing of the housing.

The Canadian Real Estate Association (CREA) pointed to a continuing trend of low availability in the country.

“The relative strength of housing demand versus supply has led to an erosion of active inventory, which was already scarce in many markets before the pandemic. That said, it’s been a trend since 2015,” CREA said last year.

Canadian housing market forecast for 2022, 2023 and beyond

A median of seven responses to a survey by Reuters showed that prices had to fall by almost 18% to be valued at their fair value.

“The fact is, house prices have been disconnected from income and rents for some time,” Realosophy Realty chairman John Pasalis told Reuters of the Canadian housing market.

“Even if benchmark home prices fall another 30% nationally, this will only bring prices back to February 2020 (pre-COVID) levels that were unaffordable at the time, but buyers will also face higher interest rates compared to 2020.”

In a August 11, 2022 Remark, financial services group Desjardins has cast an equally bleak look at the Canadian housing market. Its economists expected national average prices to fall by 23% between February 2022 and December 2023, noting:

“The Canadian housing market is correcting quickly, and faster than predicted in our pessimistic June forecast. Sales and prices are contracting particularly sharply in Ontario and British Columbia.

“We continue to believe that house prices will generally fall the most from forecasts in the provinces that have seen the largest gains during the pandemic.”

Economists predicted prices would remain above pre-pandemic levels after the 2023 contraction, and pointed to factors that could help the Canadian housing market recover thereafter.

“We expect the resulting economic slowdown to ease inflationary pressures enough to prompt the Bank to reverse some of its interest rate hikes next year. This will further improve affordability, with the Canadian housing market likely to stabilize late next year. Such a sequence of events should lay the groundwork for a more durable recovery thereafter.

In an August 15 research notesRobert Hogue of the Royal Bank of Canada (RBC) predicted that prices would continue to fall even after a recent massacre:

“The pandemic may not be over, but the pandemic-era housing market boom certainly is. Since the Bank of Canada began raising its policy rate in March, home resales have fallen 31% and prices (benchmark) by almost 6% nationally, including monthly declines of 5 .3% and 1.7%, respectively, in July.

Are the signs pointing to a collapse in the Canadian real estate market? Thanks to huge growth in recent years and stubbornly low supply levels, analysts believe prices should remain above pre-pandemic levels.

Note that their predictions may be wrong and should not be used as a substitute for your own research. Always do your own due diligence before trading, by checking the latest news, commentary, technical and fundamental analysis. Remember that past performance does not guarantee future returns and never trade money you cannot afford to lose.

Studies in this week Overview of the Hutchins to find corporate borrowing costs rise with the value of the dollar, Black women have died of COVID at disproportionate ratesand more. Want to receive the Hutchins Roundup by email? Sign up here to receive it in your inbox every Thursday. The ups and downs of the […]

The federal government’s massive debt due to pandemic emergency spending could double over the next few decades as borrowing costs rise and spending costs soar. Key points: Stephen Anthony warns debt bill could double to $1.7 trillion by 2032-33 to fund major spending But the treasurer maintains that the debt is manageable Mr Anthony says […]

By Gadiosa Lamtey Dar es Salaam. High borrowing rates in the banking sector have sparked a wide debate with some questions as to whether recent central bank tax measures have improved liquidity and reduced the cost of lending. The debate was revived this week when Vunjo MP Charles Kimei pointed out in parliament that “the […]